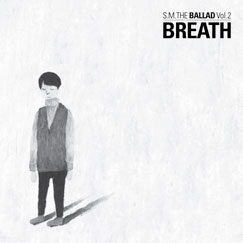 SM THE BALLAD to Release Vol. 2

A story on the theme of ‘separation.’

‘SM THE BALLAD’ is a project group established with the goal of presenting perfect ballad music through the participation and collaboration of various artists. The first album released in November 2010 drew a great attention with the wonderful harmony by four artists, TRAX Jay, Super Junior Kyuhyun, SHINee Jonghyun, and the rookie JINO.

For this second album,

Also, this album bound all 6 songs together with a story on the ‘separation’ theme to double the joy of listening. The songs are organically connected from the intro ‘Dear…’ to ‘Breath’ which depicted the hearts of a broken couple right after the separation, ‘Blind’ which expressed how a man feels after the separation, ‘Set Me Free’ which expressed how a woman feels after breakup, ‘A Day Without You’ which talks about the changes in everyday life after separation, and then to ‘When I Was… When U Were…’ which is about a broken couple who ran into each other after separation talking about the past when they were in love.

‘Breath’ – a Duet about the Broken Hearts of a Couple, ‘Blind’ – a Sad Ballad
To be Released in Korean, Chinese, and Japanese at the Same Time!

The title song, ‘Breath’, is a ballad with captivating voices of mixed duo and the highly elated climax toward the end and is depicting a broken couple holding on both ends of a telephone but cannot continue talking but only sigh as the awkward silence hung between them after separation.

The next song, ‘Blind’, which starts with a touching piano melody, expresses the heart of a man whose feeling toward his love grew too much to lose her love and its dramatic composition and beautiful melody line to create a sad mood.

Taeyeon’s solo, ‘Set me free’, is a dreamy balld that expresses a story of a woman who ardently wishes to erase the ex-lover off her mind and wants to be free from such fetters, and Taeyeon sings with her restrained voice in more mature way.‘A Day Without You’ is an urban pop that shows a man’s story about the changes in everyday life after separation and the voices of Jonghyun and Chen are similar to each other as if they are a single artist.

The duet by Chen and Krystal, ’When I Was… When U Were…’, is a medium-tempo ballad depicting a story of a couple who broke up and ran into each other in the style of conversation, and the humming following the chorus adds a glimpse of sad feeling.