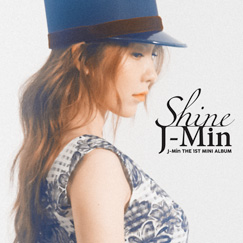 This is J-Min’s first Korean solo album with various rock-based genres that consists of  a total of 6 songs, includes 3 songs, ‘If you want’, ‘Finally’, and ‘Secret Letter’, written by J-Min. Altogether this shows her own unique music color.

Especially, when she debuted in Japan in 2007, she was acknowledged as a great singer. Also domestically, not only did she participated in various OST albums for dramas such as ‘God of War’, ‘Wild Romance’, ‘The King 2 Hearts’, and ‘To The Beautiful You’ but  also appeared in musical productions of ‘Jack the Ripper’ and ‘Three Musketeers’, proving her singing abilities. Thus, much is expected of the new songs and performances that J-Min will present through this mini album.

The title song, ‘Shine’, is a modern rock song with an upbeat rhythm and poetic lyrics, together with  the guitar lines in the intro and bridges that are combined with J-Min’s shouting-style of singing that breaks through the hot summer heat to mesmerize the music fans.

‘Hoo’ is an acoustic ballad song that captures listeners’ ears with J-Min’s unique clear voice, which  was pre-released as a digital single in June and received favorably by the public. ‘If you want’ is an upbeat modern rock single  that she previously released in Japan, which was made more special by adding  Korean lyric written by J-Min herself.

The album also  includes ‘My Everyday’, an acoustic ballad song with pastoral lyric, ‘Finally’, a pop ballad song enhanced with rock sound, and ‘Secret Letter’ with lyrical melody in a retro tone, and all 6 songs are expected to bring much attention from music fans.