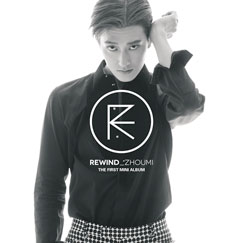 ZHOUMI is expected to draw great attention from fans globally with his first mini album titled ‘Rewind’ releasing on October 31 through various domestic music sites and Baidu Music of China and will be promoting the album fully in Korea and China.

ZHOUMI has enjoyed great popularity throughout Asia due to his handsome look, excellent singing ability, and dance skill he displayed while promoting as SUPER JUNIOR -M member. ZHOUMI is also emceeing various programs such as ‘Idol True Colors’, a variety show aired on MBC MUSIC in Korea and YOUKU of China, and ‘The Show Season 4’, the music program broadcasted live on SBS MTV and TUDOU of China, and many fans are expecting to see the new images of ZHOUMI to be released through the solo album.

ZHOUMI will be promoting both in Korea and China, with the title song, ‘Rewind’, as well as ‘Why (Color-blind)’ which were recorded in two versions, Korean and Chinese, and 4 Chinese songs in various genres including ZHOUMI’s first composition, ‘Lovesick’, in total of 8 songs, will present various musical colors of ZHOUMI.

The title track, ‘Rewind’, is an R&B song characterized by the gentleness of retro soul and pop and melodical chorus. The lyric contains the wishes to return to the time before the break-up. Korean version features the rap by EXO-K CHANYEOL and Chinese version, by EXO-M TAO to double the charms of the song.

‘Why (Color-Blind)’ is an R&B pop song with an impressive three-dimensional sound giving the sense of space and is presented in two versions, Korean and Chinese, each showing unique charms.

Also, ‘Lovesick’, the first song composed by ZHOUMI, perfectly combined the sweet piano melody and orchestra sound with his captivating voice while ‘Without You’, an R&B pop emphasized the theme with simple and sweet piano.

Also, ‘Loving You’, the duet presenting warm and loving mood features f(x) VICTORIA to create a beautiful harmony with ZHOUMI, and ‘Love Tonight’ with the interesting lyric written on the vampire’s love theme featured EXO-M TAO’s rap to add the charms to  the song and present the fantastic collaboration with ZHOUMI and younger artists of SM.