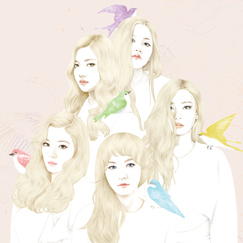 Red Velvet will come back as a five-member team including IRENE, SEULGI, WENDY, JOY and a new member, YERI.Through such change, Red Velvet will not only expand their musical spectrum, but also maximize synergy effects of the talents and charms of members to provide top-notch music and performing stages. Thus, a high level of attention is being held on their future activities.

Red Velvet made their debut on August 2014 with their first digital single ‘Happiness’ to show their lively and girly charms, and in their second digital single, they displayed more mature and alluring performances with ‘Be Natural’. While proving their outstanding skills and appeals, they swept New Artist Awards (Rookie of the Year award) in major music awards in 2014 within just four months since their debut. Thus, it is expected that the music industry will pay attention to the works of Red Velvet who will begin their activities in earnest with the release of their first album.

This album is comprised of a total of six tracks of various genres, and as Red Velvet’s aspiration is to express colorful music and performances like the powerful and alluring color of ‘Red’ and feminine and soft feelings of ‘Velvet’, they will kick off their activities with two title songs ‘Ice Cream Cake’ and ‘Automatic’ so that fans can see both their lively charms and alluring beauties simultaneously. It is expected that Red Velvet will mesmerize music fans with their two faced charms.

The title track ‘Ice Cream Cake’ is an electronic pop song with mystical music box sounds. The lyrics isabout a girl’s emotion filled with excitement after falling in love, which is as sweet as an ice cream cake, and it is more than enough to experience the cute and lovely charms of Red Velvet.

The double title song, ‘Automatic’, is an urban genre track with impressively smooth melodies on top of a groovy drum beat. The song is highlighted with the detailed lyrics that explain being automatically attracted to a person, andthe vocal talents of the members are outstanding. It offers the opportunity to see the matured look of Red Velvet with an alluring demeanor, and therefore it is expected to be a treat for the eyes and ears of music fans.

Also, ‘Somethin Kinda Crazy’ is a modern R&B pop track that perfectly mixes lyrics that honestly confesses the heart-pounding feeling of first love with a pure melody. ‘Stupid Cupid’ is a dance pop song highlighted with fun-filled guitar riffs and exciting shuffle rhythms, and the lyrics that cutely complains to Cupid who doesn’t make one’s love come true adds fun to the song.

The album also contains an R&B track ‘Take It Slow’ with a sweet melody that shyly expresses love and asking the lover to take it just a bit slower, as well as the modern ballad ‘Candy’ with lyrics that depicts a loved one as candy. This album contains a total of 6 tracks, so it is more than enough to meet the different musical colors of Red Velvet.