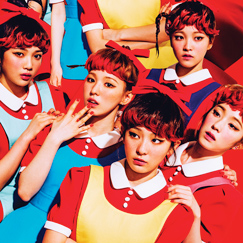 
Red Velvet is returning splendidly with the release of the first regular album, ‘The Red.’

Red Velvet is releasing the first regular album, ‘The Red’, on September 9. For this is the first album after the sensational hit in March, ‘Ice Cream Cake’, it anticipates immense responses from the fans who have waited for new songs and performances of Red Velvet around the world.

This album lists a total of 10 songs including the title song, ‘Dumb Dumb’, that represent the music styles suggested by the color “Red”, which is a part of the team’s name, and the hit makers of the world including Kenzie, LDN Noise, Daniel ”Obi” Klein, Hwang Hyun, and Jinbo teamed up for the album to offer the chance to experience more refined music.

Particularly, Red Velvet swept the top ranks on various digital track, album, and M/V charts at home and abroad with the mini album they released in March and topped all charts of terrestrial and cable television music programs achieving the sextuple crown with the title song of the mini album, ‘Ice Cream Cake’, proving the immense popularity. Since members have also built up their reputations hosting various events and appearing on variety shows, fans are showing increasing expectations for the new appearances and performances that the group will show through their first regular album.

Title song, ‘Dumb Dumb’, is an up-tempo dance-pop song with addictive hook and intense groovy beat, and the British composer team, LDN Noise, added to the perfection of the song. The lyric draws listeners’ ears with the story of a cute girl who feels awkward about everything like a dumb in front of a man she likes.

‘Huff n Puff’ is a dance-pop song with fresh sounding combination of brass and dubstep, and the lyric interestingly depicts the transition of consciousness from where they huffed and puffed as they romped around in the land of dream they imagined in their childhood to where they wake up from the dream and return to reality.‘Campfire’ is an R&B pop song with impressive rhythmical guitar intro and the lyric that tells their wish to get closer with their lover through candid talk around a campfire.

‘Red Dress’ where a girl wears a red dress and clumsily but slyly tempts a man who treats her only as a child, ‘Oh Boy’ which is a soulful R&B pop song genuinely presenting the singing ability of the members, and ‘Lady’s Room’, which is an R&B based pop song rendering the sisterhood between girls and the happy moments they share also double the fun of listening the album.

The album also presents ‘Time Slip’ which is a hip-hop based R&B song with the lyric that describes the tightness and listlessness that one feels while going back and forth between dream and reality in the lazy morning; ‘Don’t U Wait No More’ which tells an interesting story where a girl hits on a clever idea to get closer to her boyfriend; ‘Day 1’ which describes the feeling of love that has just begun by combining bass and piano with the sweet vocals of the members; and ‘Cool World’ which is the synth-pop song with the hopeful lyric that tells listeners to love their uniqueness as it is rendered in members’ refreshing vocals, and all 10 songs covering various genres represent the  Red”-ness of the group.

Meanwhile, Red Velvet will be promoting with the title song, ‘Dumb Dumb.’