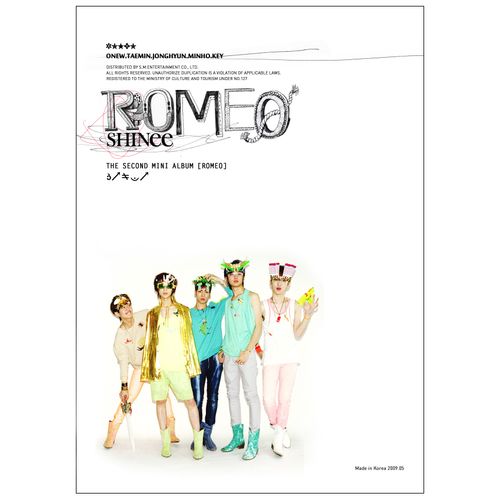 Group of Young and Handsome Artists, SHINee, Comes Back Splendidly as 21st Century Romeo!
The 2nd Mini Album ‘Romeo’ Release on the 25th!

The contemporary band, SHINee, is making splendid come back with the release of the second mini album ‘Romeo’ on May 25th.
SHINee debuted in May last year, and they worked the magic of making the title song of the first mini album, ‘Replay’, and ‘Love like Oxygen’ in the first regular album mega chart-hits one after another and also sweeping all new artist awards at various year-end music awards.

The second mini album, ‘Romeo’, is a new album released in about 9 months after the release of their first regular album in August last year, ‘The SHINee World’, and it is the premonition for the ‘Romeo’ craze sizzling the popular song circles in 2009 with SHINee’s own elegant and in-depth music.


The title song, ‘Juliette’, is a trendy urban dance song that fantastically balanced elegant rhythm, acoustic drum sound, and SHINee’s vocal, and the lyric sensuously written by Jong Hyun who wrote a lyric for the first time after the debut outstands.
Especially, this song is the work of the famous composer ‘Remee’ who wrote BoA’s ‘Eat You Up', TVXQ!’s ’MIROTIC‘, and SHINee’s ‘Love like Oxygen.’
This song was previously released by Corbin Bleu in 2007 with the title, ‘Deal with it’, and it is reborn into ‘Juliette’ in 2009 through SHINee’s unique sentiments, and SHINee’s splendid and refined performance will mesmerize eyes and ears of music fans.
Listeners will experience various musical emotions through songs such as ‘Talk To You’ that suggests masculine performance with powerful emotion, ‘Hit Me Baby’ written by Young-hu Kim who presented sensuous lyrics through 'Replay' and 'Love like Oxygen' and given life through genuine R&B vocal of SHINee members, and ‘Señorita’ written by hit composer Kenzie with exotic charms of Spain filling up the entire song.

The album also includes ‘Please, Don’t Go’, the album’s only ballad song and a special gift for SHINee from Brown Eyed Soul’s Jungyup and composer Eco Bridge translated into the beautiful duet harmony of ONEW and Jong Hyun, and ‘Romeo+Juliette’ created with the charming voice of the youngest member, Tae Min, recreated through mechanical sounds laid on top of a unique structure made of 8-bar loop. The album has 6 great songs in total.

Lyrics of All Songs Connected as a Story, Presenting ‘21st Century Romeo and Juliette!’

The second mini album, ‘Romeo’, placed songs in a way to give the feeling that the lyrics of all 6 songs are connected as one story along with the theme, ‘Romeo and Juliette’, to bring out the flutter and joy of the first love and the sadness in parting through the lyrics to present the ‘21st Century Romeo and Juliette’ that you can enjoy the entire album like a story.
As much as SHINee has drawn great attention as the next generation fashion icon while making their music, dance, and fashion smash hits like their title, the contemporary band, SHINee’s performance and fashion that will be shown with the second mini album are also expected to bring great attention.