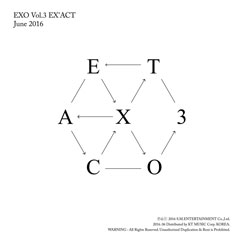 
EXO (S.M.ENTERTAINMENT), the top global artist to dominate the pop music world this summer, is about to make a splendid return with the third regular album, EX’ACT.

The new album to be released on June 9th lists nine songs presenting EXO’s colorful world of music. It includes double title tracks, ‘Monster’ and ‘Lucky One’, and is raising expectations of the fans around the world who have waited for new songs and powerful performance.

More importantly, EXO is returning with the third regular album in six months  following the December 2015 release of the winter special album, ‘Sing For You’. There is much attention towards EXO’s third regular album and the records it will set, due to EXO’s influence as the world’s most popular group. To prove this, EXO has already set the grand record of winning the title of the Double Million Seller by selling over a million copies of both the first regular album released in 2013 and the second regular album released last year. EXO has also been ranked top on various music charts while sweeping digital track, album, and television charts each time it released a new album. In addition, EXO has also won  the grand prize at the year-end music awards for three consecutive years. Thus,there is much attention towards the new records that EXO will set with the third regular album.

Double Title Tracks Giving off Contrasting Charms of EXO, ‘Monster’ and ‘Lucky One’!
Expected to Make the Best Ever Hits -Raising Expectations!

‘Monster’, one of the double title songs of the album, is a dance song that contains a sharp drum beats and dark but fresh vocal patterns.  The lyrics that directly  display the irresistible obsession toward the one they love is perfectly combined with the music to give off the intense charisma of EXO.

The other title song, ‘Lucky One’, is a bright and cheerful R&B funk dance song that pleases ears with the funky sound and trendy disk tempo. The lyrics of the song wittily depict the excitement  of a man who has set out to find the love of his destiny..

EXO’s member CHANYEOL participated in writing the lyrics for the song ‘Heaven’, which combines piano melody and rap to express the lovely time spent with lover as if it is a  time spent in heaven. On the other hand, the minimal ballad song ‘Stronger’ makes a prominent use of jazzy piano and includes encouraging lyrics that give strength to the lover.

Other tracks include ‘Artificial Love’,a pop song that captures ears with the bass and interesting groove, ‘White Noise’,which is an electronic mid-tempo song with eccentric bass and vocal range with interesting lyrics that illustrate  sadness with phrases such as  ‘I only have to find you among all sounds of the world’, and ‘They Never Know’, which is an R&B song made of bright synthesizer sound, dark bass tone, and up-tempo drum.  To conclude, all nine songs will present the various musical emotions of EXO.