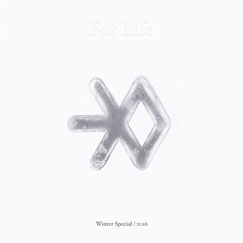 EXO is Releasing ’Winter Song that You Should Not Miss’ this End of the Year!
Unrivaled Group EXO Releases ‘For Life’ – Winter Special Album, 2016 on December 19th !


‘For Life’, the winter special album of the incomparablegroup, EXO, will be released on December 19th, 2016.

This album is consisted of 2 CDs, Korean and Chinese version respectively, and each contains five songs including the title song, ‘For Life’, and presents the unique winter mood of EXO in various music generes such as fusion hiphop and R&B. It is expected to draw enormous responses from music fans around the world.
2016 is another meaningful year for EXO. EXO set the record as triple millennium seller by selling over 1 million copies of their third album this year consecutively after their  first and second album. EXO is also setting wonderful record of winning the ‘Grand Prizes’ at various 2016 awards including '2016 Asia Artist Awards', '2016 Melon Music Award', and '2016 MNET ASIAN MUSIC AWARDS'. Not only as a group, EXO presented their 1st unit album, EXO-CBX’s ‘Hey Mama!’, and Lay made a solo debut with his 1st mini album ‘LOSE CONTROL’.  They demonstrated themselves as the world’s hottest group.

Well-made songs collaborated between EXO and other artists, such as ‘Dream’ by Suzy x BAEKHYUN and ‘Dancing King’ by Yoo Jae Seok x EXO,draw a huge attention and a number of Drama OSTs which EXO participated,  such as ‘Everytime’ by CHEN, ‘For You’ by EXO-CBX, and ‘Stay With Me’ by CHANYEOL, was a great success. As retrun of this continuous love and support from their fans, this album was prepared as a  special year-end gift for the fans. .

‘For Life’ – The Pop Ballad Song with Romantic Lyrics

The title song, ‘For Life’, is a pop ballad combining sweet piano melody with beautiful strings. The combination of hit-song composer Kenzie and Matthew Tishler, already proved their  great teamwork on ‘Sing For You’ last year, raises expectations, and the lyrics about a sincere guy promoising his one and only love for life adds the romantic mood to the song.

‘Falling For You’ is an R&B pop song featuring soft but strong vocals perfectly combined with acoustic drums and the lyrics depicts the wish to become a snowflake falling from the sky to reach the lover. R&B ballad song, ‘What I Want For Christmas’, delivers the winter atmosphere through the moody piano and  jazzy drums and the lyrics express thank you message to fans celebrating the 5th winter together.

The album also includes ‘Twenty Four’ which is a fusion hiphop song with addictive chorus and powerful rap and ‘Winter Heat’ which is an up-tempo R&B pop song that reminds the warm memories in last winter and hopes to feel that moment again. All five tracks will  bring you to EXO’s special winter mood.