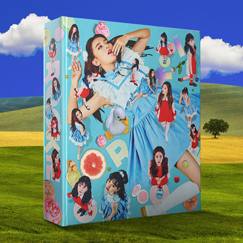 The new release scheduled for February 1st delivers six songs in various genres including the pop dance title song, ‘Rookie’. The album will present more matured musics of Red Velvet, and it is expected to be loved by global music fans.

Especially, Red Velvet swept various domestic album charts with their 3rd mini album ‘Russian Roulette’ released in September last year and stayed at the top of the digital song charts for a very long time with the title song, ‘Russian Roulette’. ‘Russian Roulette’ ranked 2nd place on Billboard’s World Album chart and Digital Song Chart respectively and its music video was chosen as the Most Viewed K-POP Music Video in America in Septemeber. As Red Velvet enjoyed their global popularity with their 3rd mini album, this 4th mini album is also expected to be loved as well.

Also, Red Velvet is gaining the attention for their moves in 2017 as they were selected in the ‘Most Expected Hallyu Star Top 10 of 2017 in China’ by People's Daily of China in December last year. In addition, Red Velvet was included in the Top 10 of the ‘Melon Music Award’ and received the Best Music Video, received CeCi Asia Icon Award at the ‘Golden Disc Awards’, and received the Main Prize at the ‘Seoul Music Award’ held on January 19th.

The title song, ‘Rookie’, is a pop dance song with funky grooves that plays up the unique vocal style by Red Velvet. The cute lyrics describe and call the lover as ‘Rookie’, and the part ‘Rookie’ presents highly addictive hook which makes the song more exciting.

‘Little Little’ is an R&B pop song expressed in warm voices of members and the lyrics express the quivering feeling toward the lover as his little habits and his words mean a lot to her. ‘Happily Ever After’ perfectly combines the unique rhythm and colorful synthesizer sounds and the lyrics tells the story of famous fairy tales such as ‘Cinderella’ and ‘The Sleeping Beauty’ in little different way.

‘Talk To Me’ is a medium tempo song that combines the lyrics depicting the  wish to know everything about the lover and the sweet voices of members to increase the fluttering felling while ‘Body Talk’, an R&B pop song, attracts ears with the emotional lyrics that express the breaking up moment with lover which can be felt without words.

‘Last Love’ is the remake of ‘Last Love’ released in 1999 by ECO, which was the title song of their third album. WENDY sang in her own style to amplify the sad mood of the song with  emotionally yet stable vocals and the competent composer, Don Spike, arranged the song elegantly while keeping the original composition.