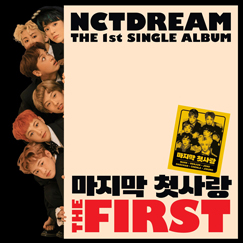 Teen Boys to Captivate the 2017 K-Pop Industry, NCT DREAM!
First Single Album ‘The First’ will be Releasedat 00AM on February 9th and the Title Song is ‘My First and Last’!
Love Song of Teenager Boy! Expectation is Growing!


NCT DREAM, the teenager boy group of the massive conceptual group NCT (S.M.Entertainment), is returning with their first single album.

NCT DREAM will release all of the tracks of their first single album ‘The First’ through various music websites from 00AM on February 9th. They will start the promotion for their title track ‘My First and Last’ and  they are expected to capture many loves from their music fans.

NCT DREAM, all teenagers, made their debut in last August and presented their cutting-edge hover-board performance with their teen pop dance song ‘Chewing Gum’, gaining huge popularity for their energetic and adorable charms. This time, the six members, MARK, JENO, HAECHAN, RENJUN, JISUNG, and CHENLE, are expected to capture  the global music fans with their new music and upgraded performances.

The title track is ‘My First and Last’, which is a bubbly pop with a catchy melody. The lyrics deliver the love in the way of an ambitious teenager boy who pomises to make his first love to be his last. Fans can look into the rap lyrics as MARK participated in.

Also, ‘Dunk Shot’ was originally released by Lee Seung-hwan in 1993 and is now reborn by the hit composer Kenzie’s arrangement  in a pop rock genre filled with the youthful energy of teenagers. The lyrics depecits the hope to feel the excitement of dung shot and energetic and lively voices of NCT DREAM will make this song more enjoyable.

This single will contain five tracks including the Chinese version of the title track ‘My First and Last’ and the Korean and Chinese versions of NCT DREAM’s debut song ‘Chewing Gum’ that was released last year, Thus, this album will bring you much closer to the unique charms of NCT DREAM.