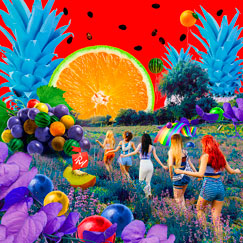 This album presents Red Velvet’s various charms through a total of five songs, including the title song, ‘Red Flavor’, which creates a cool and energetic mood. It is also expected to win enthusiastic responses from the fans globally through its high quality music that perfectly transfers the feelings of summer.

Red Velvet has been loved for their refreshing, lively images and their bright energy along with a number of successful songs starting from their debut song, ‘Happiness’, to ‘Ice Cream Cake’, ‘Dumb Dumb’, ‘Russian Roulette’, and ‘Rookie.’ As they have earned their title as the hottest girl group, expectations of Red Velvet’s new music and performance of this new album are high.

Also, Red Velvet has enjoyed great popularity with ‘Rookie’, the 4th mini album released in February, by winning first place in the album charts and nine awards from music programs in Korea, and also placing first place on Billboard’s World Album Chart, iTunes Album Chart in eight countries around the world and the Korean Music Chart of China’s Xiami Music. The title song, ‘Rookie’, also came in 7th on Gaon’s digital chart for the first half and still remains in the top ranks on the digital music chart. All eyes and ears are drawn towards the comeback of the new summer queens, who will be heating up the music scene this summer.

The title song, ‘Red Flavor’, is an energetic up-tempo dance song with lyrics that express the sizzling ‘summer’ and the thrill that ‘love’ offers with the color ‘red’ and flavor. This song will be the summer song to chase away the summer heat and is expected to become another addition to the list of Red Velvet’s hit songs.

In addition, ‘You Better Know’ is a bright and cool electronic pop song featuring lyrics that bring encouragement and hope to people who are worn out. ‘Zoo’ is a tropical rhythm dance song with inserts of variety of Safari sounds that make the song even more fun to listen.

'Mojito' is an urban pop song that expresses the romantic feeling of taking a trip with a lover and the beautiful summer scenes with dreamy tunes. ‘Hear The Sea’ is a medium tempo song that depicts the summer night scene after the bright, hot sun sets with the gentle piano and guitar sounds that bring out the delicate and emotional vocals of Red Velvet.

Red Velvet’s summer mini album, ‘The Red Summer’, will be released in stores on July 10th.