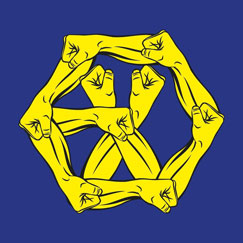 EXO (S.M.ENTERTAINMENT) will be releasing the repackaged 4th album, ‘THE WAR: The Power of Music’, on September 5th.

This album consists of a total of 12 songs, in which 9 of the songs are from the previous 4th album and 3 new songs, including title song, ‘Power’, ‘Sweet Lies’, and ‘Boomerang’. Through the repackaged album, EXO’s diverse music style can be fully experienced.

In addition, over 1 million copies of EXO’s album, ‘THE WAR’, have been sold, and EXO has become a quadruple million-seller in only 24 days. They not only set the record for placing No.1 the most on Gaon’s Digital Chart for four weeks, but also ranked No. 1 on iTunes Album Chart in 42 regions around the world, on Billboard World Chart for two consecutive weeks, on Apple Music Album Chart in 18 regions, on United World Chart, and on China’s Xiami Music Korean Music Chart. By sweeping Korean and international music charts, EXO has proven their global popularity and impact with their album. And their newly repackaged album is expected to win immense responses as well.

Title Song, ‘Power’, is an EDM Song with Addictive Chorus!
The title song, ‘Power’, is an EDM song featuring addictive chorus and powerful energy transmitted from dynamic synthesizer sound and drum beats. The song provides interesting lyrics containing a message about uniting and bringing greater strength through music. The song is expected to mesmerize the music fans globally with new charms of EXO, following the success of ‘Ko Ko Bop’ which has swept across the whole world.

In addition, ‘Sweet Lies’, is an emotional PB R&B song that captures the ears with dark synthesizer, dreamy piano riff, and powerful drum sound. CHANYEOL has co-written the lyrics, which tell a story of a man who continues on with a dangerous love through his sweet lies. On the other hand, ‘Boomerang’ is a disco based medium tempo song with charming and funky rhythm, where the lyrics of the song talks about a man who wants to leave his lover but eventually returns to her like a boomerang.