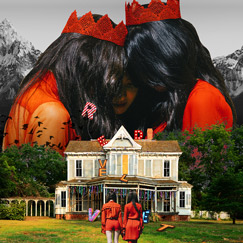 
The hottest girl group, Red Velvet (S.M.Entertainment), is releasing their second album, ‘Perfect Velvet’ on November 17th, and is expected to be another smash hit in the 2017 music scene.

Red Velvet’s second album, ‘Perfect Velvet’, contains a total of nine songs including the title song, ‘Peek-A-Boo'. The album’s quality was increased by topnotch musicians around the world including the world-renowned producing team The Stereotypes, the hit song maker Kenzie, global EDM musician Hitchhiker, and hit song composer, DEEZ. These songs of diverse styles are expected to captivate fans globally.

Red Velvet has especially become the ‘Summer Queens’ after sweeping various Koreanand overseas charts in July with ‘Red Flavor’, the title song of their summer mini album ‘The Red Summer’. They not only placed No. 1 on various digital, album charts, and television music program charts, but also on Billboard World Albums Chart, Worldwide iTunes Album Chart in eight countries, and Korean Music Chart of China’s Xiami Music. Also, Red Velvet has been on the winning streak with each song they released such as their debut song, ‘Happiness’, followed by ‘Ice Cream Cake’, ‘Dumb Dumb’, ‘Russian Roulette’, ‘Rookie’, and ‘Red Flavor’, and has truly become the hottest girl group. This album is expected to win immense responses as well

The title song, 'Peek-A-Boo', is an up-tempo pop dance song with addicting hook, ‘Peek-A-Boo’. The lyrics interestingly compare the present generation’s lifestyle of having an easygoing attitude towards love to children’s play in the playground. The song presents new charms of Red Velvet, increasing the expectations of becoming another big hit.

The new album will definitely mesmerize its listeners with songs such as ‘Look’, a disco style dance song combined with easy melody, rich chorus, and Red Velvet’s soft vocals, ‘I Just’, a future bass based electronic pop song created through the collaboration with the global EDM musician Hitchhiker, and ‘Attaboy’, a song that brings hip-hop sound with charming refreshing hook melody.

‘Kingdom Come’ is an R&B song that creates a unique, dreamy atmosphere with acoustic drum source loop and rich chorus while the lyrics interestingly depict the moment of falling in love as the feeling of heaven. ‘My Second Date’ is a medium tempo pop dance song with a change in mood that expresses the excitement before the second date.

The album also contains ‘Perfect 10’, a song that depicts the process of photographing the lover as one’s own exclusive subject, ‘About Love’, an urban pop song that delivers a happy feeling with the warm EP sound and rhythmical guitar melody, and ‘Moonlight Melody’, an acoustic ballad song that arouses the sentiments with the delicate piano melody and emotional strings. All nine songs of various genres will give the listeners a chance to experience more mature music of Red Velvet.