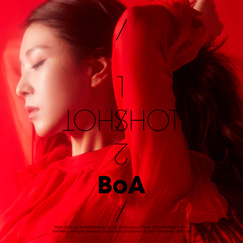 This album comprises a total of seven songs in various genres including the title song, 'ONE SHOT, TWO SHOT’, which offers a full experience of BoA’s  broad music spectrum.

Especially, not only has The Stereotypes, hit song maker who won the triple crown at the 60th Grammy Awards, but the world-renowned producing team, The Underdogs, and S.M.Entertainment’s representative producer, YOO YOUNG JIN, has participated in the production. Also the album offers songs that were directly written and composed by BoA who has proven her capacity as a singer-songwriter by writing, composing, and producing all of the songs in her eighth album. The album also features star rapper, Junoflo, and talented R&B musician, Chancellor, adding more charms to the album.

Having announced to actively promote in 2018, BoA announced a hip hop dance song, ‘NEGA DOLA’ on January 31st and won favorable appraisal for her distinctive, charming vocals and hip-hop swag performance, which created intense girl crush. This time, she has transformed with deep house dance song, 'ONE SHOT, TWO SHOT’, and is expected to mesmerize the world of pop music with her overwhelming charisma.

The Moment of Falling in Love! Title Song, ‘ONE SHOT, TWO SHOT’!

The title song, 'ONE SHOT, TWO SHOT', is a deep house dance song featuring charming and catchy melody. The lyrics, personally written by BoA, increased the joy of listening with witty expressions by comparing the moment when a man and a woman fall in love to the moment when the fireworks crack.

The new age R&B pop song, ‘YOUR SONG (feat. Junoflo)’, features the rapper, Junoflo, where  the lyrics depict the delicate feelings between a man and a woman who cannot help but love each other while they hurt each other. The R&B pop song, ‘ALWAYS, ALL WAYS (Feat. Chancellor)’, fascinates the listeners with charming vocals by BoAand the R&B musician Chancellor, which tell a story of a man who is slowly falling in love with a woman with enchanting charms.

Also, ‘EVERYBODY KNOWS’ is a retro pop song with sweet and dreamy vocals by BoA and ‘RECOLLECTION’ is a pop-punk song written and composed by BoA.

This album also includes the R&B hip-hop dance song, ‘NEGA DOLA’, which became hot after it was released as a digital single on January 31st, and ‘CAMO’ which was released through the ‘CAMO Project’ that displayed BoA’s brilliant performance and transformation in June. All seven songs will give a chance to experience richer world of BoA’s music.