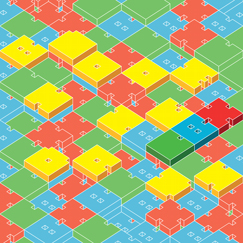 EXO-CBX topped various music charts around the world with their 1st mini album, ‘Hey Mama!’ which was released in October 2016. Also, the unit debuted successfully in Japan with their first Japanese mini album, ‘GIRLS’, and has won great popularity to even appear on ‘a-nation’ which is a famous summer music festival. These successes raised expectations for their new album further.

Sweet proposal to a Girl as Beautiful as a Flower! Title Song, ‘Blooming Day’

The title song, ‘Blooming Day’, is a light and refined dance pop song that redounds to the sweet vocal tones of the members. The lyrics deliver a sweet proposalto a beautiful girl who has bloomed in their hearts like a flower and made their day, which will surely appeal to listeners’ senses and emotions toward Spring.

This album also includes ‘Monday Blues’ which is a reggae based soul R&B song that interestingly depicts the moment they met a girl of fate who turns an exhausting Monday routine upside down, ‘Sweet Dreams!’ which is an electro pop song that describes the restless feeling before a date on a Wednesday evening, and ‘Thursday’ which is a jazzy R&B pop song that attracts ears with the witty lyrics that compare Thursday that draws closer from weekday to weekend with the feeling between a couple that becomes deeper and deeper.

Other tracks include ‘Vroom Vroom’ which is a funky style urban R&B song wanting to escape on a Friday Night while radiating powerful energy to listeners compares a man approaching a girl he falls in love at first sight to a speeding car.  ‘Playdate’ is a medium tempo R&B pop song that talks about Saturday when they are over head and heels in love, and ‘Lazy’ which is a retro style R&B song that depicts a lazy Sunday. All seven songs that express each day of the week present various music styles of EXO-CBX.