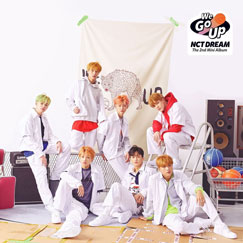 
The peerless teenager team, NCT DREAM (SM Entertainment), is releasing their second mini album, ‘We Go Up’, on September 3rd.

This album is composed of a total of six tracks including the title song, ‘We Go Up’, and the hitmakers of the world including The Stereotypes, August rigo, MZMC, Bazzi, Rice n’ Peas, Cazzi Opeia, Erik Lidbom, Moonshine, Kenzie, DEEZ, and Seo Ji-eum worked together to increase the quality of the album. NCT DREAM members such as MARK, JENO, JAEMIN, and JISUNG also participated in writing the lyrics to heighten the expectations.

NCT DREAM has presented a variety of charms, continuously making progress and changing styles with each music they released from the debut song, ‘Chewing Gum’, to ‘My First and Last’, ‘We Young’, and ‘GO.’ Also, the team has been quite active in so much that they are considered to be the ‘peerless teenager team’ such as sweeping first prizes on various music charts and television music program charts and winning the ‘Top Promising Group’ award at the fifth ‘Yinyuetai V Chart Awards’ which is one of the largest music awards in China. The new music and style they will be presenting through this album are expected to draw eyes and ears.

The title song, ‘We Go Up’, is an urban hip-hop song that charmingly combines the rapping representing the old school feeling and the contrasting vocal hooks. The lyric expressed the passion for the new stage that NCT DREAM has as the group that continuously makes progress. The album contains both Korean and Chinese versions to present various charms of NCT DREAM.

Other songs in the album also attract ears: ‘1, 2, 3’ is an R&B song with a retro feel that features the funky atmosphere. The lyric compared love to photograph and expressed the wish that every moment with the lover to last forever. ‘Beautiful Times’ is a medium pop song that emotionally depicted the parting with friends that have been together for a long time. ‘Drippin’’ is a trap song with mature and intense charms.

‘Dear DREAM’ is the graduation song for MARK who is graduating the teenager team, NCT DREAM, with this year’s promotion. MARK, JENO, JAEMIN, and JISUNG participated in the lyrics to show their feelings about each other in a letter, showing the warmth and sincerity of NCT DREAM.

Meanwhile, NCT DREAM will be promoting broadly with the title song, ‘We Go Up.’