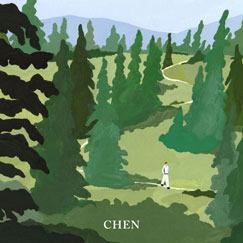 
The ‘Healing Voice’, EXO’s CHEN (SM Entertainment), is releasing his first mini album, ‘April, and a flower’ on April 1st.

This is the first solo album that CHEN is releasing after his debut album and it is packed with a total of six ballad songs of various charms including the title song, ‘Beautiful goodbye’, presenting warm music by CHEN’s sweet voice.

CHEN has gained global popularity for outstanding singing ability and powerful performance demonstrated on various concepts while promoting as a member of EXO-CBX and proved his qualities as the ‘OST King’ by making successes of a number of OSTs including ‘The Best Luck’, ‘Everytime’, and ‘Cherry Blossom Love Song.’ Such successes are increasing the interest in his first solo album.

A number of domestic and foreign musicians participated in this album to complete a high quality album. They include the hit-song maker Kenzie, one of excellent composers of Korea Kim Je-hwi, singer-songwriter Paul Kim, the composer of a number of hit ballad songs KingMing and lyricist Min Yeon-jae, popular lyricists Seo Ji-eum and JQ, and a team of composers who showed excellent team work through EXO’s ‘Miracles in December’ Andreas Stone Johansson and Ricky Hanley.

Also, CHEN expressed delicate emotion through his own words in ‘Flower’ in this album and has continuously proven musical talent through various works including the lyrics for ‘Ko Ko Bop’, ‘Love Shot’, ‘Touch It’, and ‘She’s Dreaming’ which are included in EXO’s albums and the lyrics for ‘Bye Babe’ which is the collaboration with 10cm. Such activities of CHEN are raising expectations for the new songs that he will present through the album.

The title song, ‘Beautiful goodbye’, is a ballad song that gives a strong impression with delicate piano performance. The lyrics depicts a scene where a man recalls the beautiful memory on the first day he met her while preparing for a parting after feeling that she is losing interest in him as time passes by. The sad mood of the song mesmerizes ears as the plaintive voice of CHEN blends into it.

‘Flower’ sends a comforting message that wishes a wounded heart to be healed as though the flower blooms again in spring after winter and CHEN participated in the writing of the lyrics. ‘Sorry not sorry’ features the combination of piano and strings and the lyrics make the song more charming by telling a story in a calm voice about man who ended up telling her to break up as he failed to stop the growing rift between him and her.

‘Love words’ is an urban & soul song that sounds modern and new, sending the words of love to comfort those who are exhausted inside. ‘I’ll be there’ is an emotional song that depicted the wish to be remembered in someone else’s memory for a long time. ‘Portrait of you’ is a pop ballad song that combines the beautiful piano melody with orchestra performance and delicate vocals. All six songs will be a full experience of CHEN’s warm music and voice.