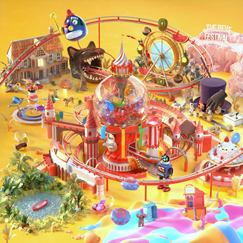 This year, Red Velvet will be promoting various activities in music under the title, ‘The ReVe Festival.’ ‘ReVe’ is an abbreviation of Red Velvet and the name of the robot character which appeared in their second solo concert, ‘REDMARE’, and it means ‘dream’, ‘fantasy’, and so on in its French form, rêve. It raises expectations for the fantastic parade of music to be presented by Red Velvet through this festival.

The new album, which marks the beginning of the festival, delivers a total of six very addictive songs including the title song, ‘Zimzalabim’, ‘Sunny Side Up!’, and ‘Milkshake’, and they will guide you to through various tastes of music unique to Red Velvet.

Last year, Red Velvet recorded the triple hit with ‘Bad Boy’, ‘Power Up’, and ‘RBB (Really Bad Boy)’ to prove their influence as the ‘irreplaceable girl group’ through a broad spectrum of music and various changes. The pack also successfully finished the Japan Arena Tour in January and the North American Tour in February. The new images they are going to show through the album are raising further expectations.

The title song, ‘Zimzalabim’, is an electro pop that combines rhythmical drum performance with catchy synth and cool melody and it draws ears as it dramatically unfolds as if it brings up a splendid image of a parade. Daniel Caesar and Ludwig Lindell, the composers of ‘Red Flavor’, the mega hit that smashed the summer in 2017, teamed up with Red Velvet once again as composer and arranger.

‘Zimzalabim’, the title of the song and the word that leads the twist in the song, is a spell mainly used in Europe like ‘abracadabra’, and it expressed the wish to follow the dream that you have kept deep inside your heart.

‘Sunny Side Up!’ is a reggae pop that keeps a balance between addictive hook and groovy beat and comes with the lyrics that attract ears by comparing the need for delicate control of feelings between lovers to a soft-boiled egg. ‘Milkshake’ is a punk pop that features rhythmical hook and its lyrics double the charms of the song by depicting the feelings that surge in when you fall in love at first sight.

The album also includes ‘Bing Bing’ which is a pop that expressed the dizzy sense of tension that comes when you realize love through the combination of groovy bass and energetic guitar, ‘Parade’ which is an electronic pop that features colorful synth melody and various sound effects, and ‘LP’ which is a contemporary urban pop that features the soft vocals by Red Velvet. These six songs, covering various genres, will definitely please your ears.