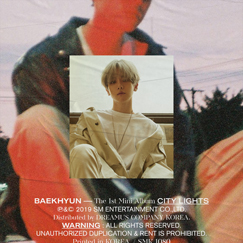 This is the first solo album BAEKHYUN is releasing after his debut. With six songs in trendy mood including the title song, ‘UN Village’, it will present BAEKHYUN’s sweet vocals and sensuous world of music.

Also, BAEKHYUN is winning global popularity for sweet voice, outstanding singing ability, and powerful performance which have been displayed while he was promoting as a member of EXO and EXO-CBX. The collaborations with other artists such as ‘Dream’ with Suzy, ‘The Day’ with K.WILL, ‘Rain’ with Soyou, and ‘YOUNG’ with LOCO became hits and proved his vocal power. Such promotions and activities are raising expectations for BAEKHYUN as a solo artist.

The title song, ‘UN Village’ is an R&B song that combines groovy beat and strings with the sensuous lyrics that express the romantic moment of gazing upon the moon with the lover on the UN Village hill like a scene from a movie.

‘Stay Up’ is an R&B song with the lyrics that interpreted a special night with the lover with a sexy dialogue and it became more charming with the featured rapper Beenzio. ‘Betcha’ is an urban beat hip-hop R&B that expressed the attitude of a charming guy who believes that his lover is his one true love in the lyrics.

This album also includes ‘Ice Queen’ which is an R&B song with a powerful message that he will use the warmth of his heart to win over the woman with cool charms, ‘Diamond’ which is an R&B ballad song that compares his love toward his lover to the diamond which is solid and shining, and the bonus track, ‘Psycho’, which made a strong impression after it was performed in his solo stage during ‘EXO PLANET #4 - The EℓyXiOn [dot] -.’ All six songs will please the listeners.