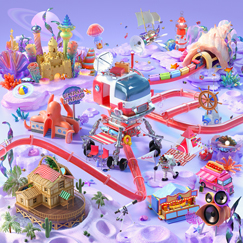 Red Velvet’s new mini album, ‘‘The ReVe Festival’ Day 2’, will be released on various online music sites at 6 p.m. on August 20th, and it delivers six songs in various genres including the title song, ‘Umpah Umpah.’

Especially, Red Velvet announced that they will be engaging in various activities to promote their music under the title, ‘The ReVe Festival’ in 2019, and made a splendid start for the festival by sweeping the top places on iTunes Top Album Charts with the very addictive wish-fulfilling song, ‘ZimZalabim’, in 28 regions around the world in June and coming first on the album and digital charts and on the television charts. This time, Red Velvet is continuing the heat of the festival with the refreshing summer song, ‘Umpah Umpah,’ and they are expected to win enthusiastic responses.

The title song, ‘Umpah Umpah’, is an up-tempo dance song laid on disco house rhythm. The lyrics written on the swimming theme tactfully expressed their wish to tell the guys, who are head over heels for their looks and charms, how to come around their senses and make great memories together.

Another song, ‘Carpool’, is a pop dance song sung in a refreshing mood, which suggests the one whom they ran into in the forest of buildings in the city to take a drive into the summer together. ‘Love Is The Way’ is a medium-tempo R&B pop song that emphasizes the retro feeling and it plainly interpreted the tantalizing feeling about how the heart and the body work differently when they are in front of one they like.

The album also includes ‘Jumpin’’ which is a pop dance song that depicts young people who are free and enjoying the music festival on a hot summer day, ‘Ladies Night’ which is an R&B pop song that tells a story of a summer night about close friends, who understand each other just by looking, spending time together by doing trivial things, and ‘Eyes Locked, Hands Locked’ which is an R&B ballad that romantically depicts the feeling that two people feel when looking at each other in the space of their own. All six songs of the new album will fully present various musical vibes of Red Velvet.