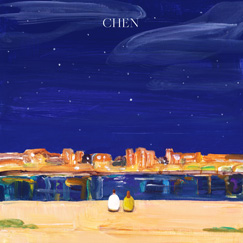 This is the new album coming out in six months after the first mini album, ‘April, and a flower’ released in April. With a total of six songs including the title song, ‘Shall we?’, the album has enough to experience CHEN’s charming vocals and more mature musical sensibilities.

Also, a variety of musicians such as the hit maker Kenzie, the excellent composers Kim Je-hwi and KingMing, and the popular lyricist Min Yeon-jae worked together to raise the quality of this album, which also added the song partially written by CHEN. It will definitely win favorable responses.

Especially, CHEN is winning great popularity globally for outstanding singing ability and powerful performance while promoting as a part of EXO and EXO-CBX, and has also proved his selling power by making hits of various drama OSTs and collaborations while promoting as a solo artist. The new music to be presented through the new album is drawing even further attention.

Title Song - ‘Shally we?’, a combination of romantic melody and emotional lyrics!

The title song, ‘Shall we?’ is a retro pop song that combines romantic melody and emotional lyrics with the elegant mood created by familiar but trendy standard classic pop style arrangement. The lyrics depict the honest and troubled heart of a guy that does not wish to leave his girl, and CHEN’s mature vocals add to the charms of the song.

‘My dear’ is a Brit pop song that features splendid development. The lyrics partly written by CHEN depicted a love story where even the farewell is beautiful. ‘Amaranth’ is a ballad song with impressive acoustic guitar sound and the flat vocals by CHEN delivering the message of heartfelt sympathies along with the yearning toward the lover.

The album also includes other songs such as ‘Hold you tight’ which is a medium tempo acoustic song that sings about the coziness felt when embracing the lover, ‘You never know’ which is a ballad song delivering a confession of ardent love, and ‘Good night’ which is a warm healing ballad song that combines dreamy sound with CHEN’s voice. All six songs deliver colorful emotions.