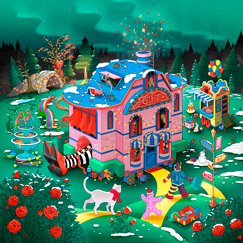 
Red Velvet (SM Entertainment) is finalizing the music festival it gave in 2019 with the new album, ‘‘The ReVe Festival’ Finale.’

On December 23th, Red Velvet is releasing ‘‘The ReVe Festival’ Finale’, the repackage album that summarizes their activities for this year presented under the title, ‘The ReVe Festival.’ The new album will deliver 16 tracks comprising the 12 songs from ‘Day 1’ and ‘Day 2’, the mini albums released in June and August, and four new songs such as title song, ‘Psycho’, and the new songs, ‘In & Out’, ‘Remember Forever’, and the special track ‘La Rouge.’

Especially, Red Velvet swept No. 1 rank on various digital charts and album charts as well as music program charts with ‘Zimzalabim’ which is a highly addictive wish-fulfilling song and ‘Umpah Umpah’ which is a sparking summer song, through broad musical spectrum and transformations. Red Velvet’s new music which will finalize 2019 splendidly is expected to draw eyes and ears.

With the addictiveness of ‘Zimzalabim’ - ‘Umpah Umpah’! The title song ‘Psycho’ is expected to make the triple hit!

The title song, ‘Psycho’, is an up-tempo urban pop song that presents Red Velvet’s skillful and humorous vocals. The addictive hook laid on top of the continuously changing melody stands out while the lyrics are about a cool couple who may look peculiar like a ‘Psycho’ but accepts that they are the one and only love to each other.

This album will give a great chance to feel various music styles of Red Velvet as it also includes ‘In & Out’ which is a medium pop dance song that wittily expressed the thrill in being spellbound to the charming guy they cannot resist, ‘Remember Forever’ which is a pop ballad song that brings back the dream-like memory of ‘The ReVe Festival’ of the summer, ‘La Rouge’ which is the special track first released at the third solo concert.

In addition to the newly added songs, this album added the tracks from ‘Day 1’ and ‘Day 2’, the previously released mini albums in a reverse order, to give a feeling that you are returning to the past summer when you enjoyed ‘The ReVe Festival.’ The album is made more special with the wish to finalize the festival splendidly like the title of the album.