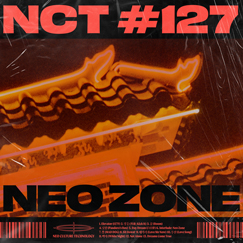 This album comprises a total of thirteen tracks reflecting NCT 127’s unique character in music including the title song, ‘Kick It.’ Like the title of the album, ‘Neo Zone’, the album drew out distinguishing characteristics of NCT 127 further to present their unique world of music to their fans. Immense responses are expected from the fans globally.

Especially, the title song, ‘Kick It’, is a hip-hop dance song that features powerful tempo and the mixture of addictive signature vocoder sound, base source with dynamic gliding effect, and energetic vocals by NCT 127. The lyrics cleverly send out a bold and confident message, ‘Overcome trauma’ to maximize the powerful energy of the song.

A number of hit song makers inside and outside Korea including the famous American producer, Dem Jointz, the world-renowned producing teams, The Underdogs and The Stereotypes, the British producing team, LDN Noise, Yoo Young-jin, Kenzie, Hitchhiker, and DEEZ participated in this album, and NCT 127’s members, TAEYONG, MARK, and JOHNNY also partially wrote the lyrics to increase the quality of the song further.

NCT 127 has enjoyed global popularity by demonstrating distinct style and unparalleled performance with every song they released since their debut with ‘Fire Truck’ in 2016 and created the K-POP sensation by going up the chart up to the 11th place on ‘Billboard 200’, which is Billboard’s main chart, and the 6th place on ‘Artist 100’, with ‘NCT #127 WE ARE SUPERHUMAN’, the mini album they released in May 2019. Based on such notable records they have set in the past, NCT 127’s comeback is expected to draw eyes and ears once again.

Title song with tremendous energy and swag, ‘Kick It’, powerful transformation of NCT 127!

The title song, ‘Kick It’, is a hip-hop dance song that features the energetic vocals by NCT 127 and intense tempo. The lyrics smoothly and cleverly send out a bold and confident message, ‘Overcome trauma’ to maximize the powerful energy of the song to transmit powerful energy.

Also, a R&B pop dance song, ‘Elevator (127F)’, expresses the wish to continue the relationship with an important person as the elevator ride to a high floor, and ‘Boom’, which is a drop-based R&B pop song accompanied by a mixture of acoustic guitar and addictive pluck sound and the intro that captures ears with MARK’s charming narration rap.

‘Interlude: Neo Zone’, which expresses overall mood of this album, features a drastic change of sound from the string ensemble in classical and dreamy mood into powerful beat, and ‘MAD DOG’ which is an ethnic trap hip-hop song led by deep bass line and unique lead sound and ‘Sit Down!’, which is an R&B hip-hop with dynamic charms, also mesmerize ears.

‘Love Me Now’ depicts the sad feeling we have when we talk to ourselves in the memory of happy moments in the past but end up hearing the echo of ourselves like in a dream, ‘Love Song’ expresses the happy moments we share with our lovers even on a rainy day we usually hate, in the form of a story, and ‘White Night’ is a slow-tempo R&B ballad song that expressed the yearning for unforgettable old lover that strikes after the break-up, through the diversity of NCT 127’s vocals.

Also included in the album are ‘Not Alone’, which sends out an honest message that we are all lonely but we should understand and heal each other and be there for each other, and ‘Dreams Come True’ which is a bright song with a message of hope that tells listeners to encourage themselves and take pride in themselves. All thirteen songs will let you have the full experience of NCT 127’s great sensibilities of music.