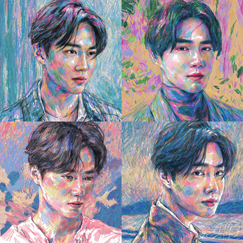 This, SUHO’s first solo album, delivers a total of six lyrical songs written based on the band sound including the title song, ‘Let’s Love,’ and is expected to win immense responses from music fans globally.

Especially, SUHO not only wrote the lyrics for all songs in the album but also participated in the concept planning to express various experiences and feelings he had while promoting for eight years after the debut by comparing them to universal love stories that anyone can easily relate to. It also increased the quality of the album further by connecting all six tracks into a single story.

Also, SUHO has been enjoying global popularity through excellent singing ability and powerful performance while promoting as a part of EXO. For he has been received well with a variety of releases including solo songs such as ‘Curtain’, the collaboration works such as ‘Do you have a moment’ and ‘Dinner’, the OST for the drama, ‘Start of the Universe’, ‘Starlight’, the songs that he will present through the new album are attracting more expectations.

The title song, ‘Let’s Love’, is a modern rock song with lyrical melody played in a warm mood. The lyrics add fascination to the song by suggesting that we may be clumsy and inexperienced at expressing feelings we have but should take courage in loving each other.

Also, ‘O2’ is a dreamy acoustic pop song that tells a story where two people with emptiness in their hearts meet each other and relieve each other like oxygen and ‘Made In You’ is a medium pop song with the lyrics that say “You are the reason I was created and my life begins from you.”

The album also includes ‘Starry Night’ which is a rock ballad song that tells the story that follows ‘Curtain’, SUHO’s first solo song released by SM ‘STATION, ‘Self-Portrait’ which features the lyrics that describe how he feels the trace of the one he loved from the image of himself in the self-portrait and think about the memories, and ‘For You Now’ which features Younha. All six songs will present the musical sensitivities of SUHO.