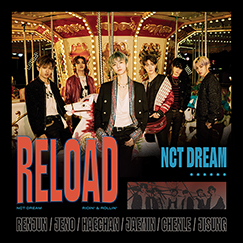 
NCT DREAM (SM Entertainment) is returning with the new album, ‘Reload’, on April 29.

This album includes five songs of various genres including the title song, ‘Ridin’.’ The album’s title, ‘Reload’, carries the passion and ambition of NCT DREAM to present the new stage with improved skills. Listeners will be able to feel NCT DREAM’s more powerful musical emotions and upgraded synergy.

NCT DREAM has given off their charms by presenting new and improved skills with each song they released, such as ‘Chewing Gum’, ‘My First and Last’, ‘We Young’, ‘GO’, ‘We Go Up’, and ‘BOOM’ and won enormous support to go first on various music charts and music programs. The new music and performance to present with the new album are expected to draw great attention.

Also, NCT DREAM ranked first on iTunes Top Albums Chart in 27 regions around the world with ‘We Boom’, the third mini album released in last July, and became the first Asian artist to make ‘21 Under 21 of the Year’ by Billboard for two consecutive years and the only Asian artist to make TIME Magazine’s ‘2018 List of 25 Most Influential Teens’ to demonstrate the power of the global late teen champion. These achievements are raising expectations for the new album.

Title song, ‘Ridin’’, is an urban trap song. The heavy bass line and intense beat awaken the instinct to ride. The lyrics describe the passion and ambition of NCT DREAM bracing themselves up before a new path.

‘Quiet Down’ which is an EDM hip-hop song sends out the message that we should trust ourselves instead of being swayed by rumors and delusions. ‘7 Days’ which is an R&B song with refreshing sound expresses the emotion that grows from romance to love with charming confession like lyrics that describe how it is to wait for an answer from a lover.

‘Love Again’ is an R&B hip-hop song with old school bass and is the last one of NCT DREAM’s First Love Trilogy following ‘My First and Last’, and ‘Bye My First…’ ‘Puzzle Piece’ which is written by JENO and JAEMIN fills the heart warmly with acoustic guitar melody and NCT DREAM’s gentle vocals.