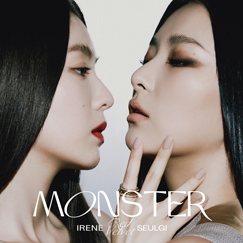 ‘Monster’, the first mini album of Red Velvet - IRENE & SEULGI, is packed with six songs that vary in genre including the powerful and mesmerizing lead single, ‘Monster. And this album expects great enthusiasm from worldwide fans.

For this album, global hit makers collaborated including Yoo, Young Jin and KENZIE who teamed up for the lead single, ‘Monster’ and Moonshine, Daniel ‘Obi’ Klein, Andreas Oberg, minGtion, and Isran also participated in production to reach it’s highest quality.

Also, IRENE & SEULGI is the first unit group of Red Velvet, a globally renowned girl group for their wide spectrum of music and ability to perform in various concepts. This duo not only demonstrated their singing and performing capabilities through collaborations and OSTs, but also proven themselves to be an ‘all-round artist’ through their involvement in advertisements, fashion, and tv shows. Many fans are awaiting their great synergy in this unit debut.

The lead single, ‘Monster’, is a pop dance song that features conceptual lyrics telling a story about an immortal ‘Monster’ that enters one’s dream and dances and plays until the person is entangled by the work of the ‘Monster.’ Relaxed but charismatic vocals are added to heavy bass and intense dubstep to present IRENE & SEULGI’s trendy and charming side that has not been revealed.

‘Naughty’, the second track of this album, is a future house style pop dance song. The lyrics express the tension felt in a developing romantic relationship by comparing it to the game of hide-and-seek. The witty lyrics and playful vocals adequately deliver this interesting love story.

‘Diamond’ delivers an encouraging message inside the dreamy sweet melody to move forward with confidence in the way one dreams of. Also, the progressive R&B dance track ‘Feel Good,’ fascinates the listeners with the extra groovy beat and addictive hook.

‘Jelly’ portrays a jealous heart and mind that cannot be concealed from the lover and names it ‘Jelly’. Moreover,, the complete version of ‘Uncover’, which was presented by SEULGI on her solo stage at ‘La Rouge’, Red Velvet’s solo concert, is included in the bonus track.