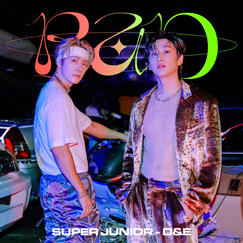 
The ‘Hot Duo’, SUPER JUNIOR-D&E, is returning with the fourth mini album in 1 year and 5 months after their release of third mini album, ‘DANGER,’ in April 2019.

Like the title of the new album, ‘BAD BLOOD’, SUPER JUNIOR-D&E transform into ‘Bad Boys’ with an image of both hip and modern which can be found on the albums of ‘COLD BLOOD’, ‘HOT BLOOD’, and ‘BALANCE.’

DONGHAE’S self-composed song ‘B.A.D’ & EUNHYUK participation in the lyrics for ‘To you, Tommorow,’
Members, more deeply involved in the production! Delivers total of five diverse tracks!

The fourth mini album, ‘BAD BLOOD’, is compiled of 5 tracks including the single, ‘B.A.D.’

First of all, the single of electronic hip-hop genre, ‘B.A.D,’ has an impressive lyrics which describes the beautiful woman in an ironic expression of ‘BAD.’ Not only DONGHAE composed ‘B.A.D’ but also wrote various singles throughout the albums for SUPER JUNIOR-D&E. It is anticipated to grab the attention of music fans worldwide.

Next track ‘To you, Tomorrow,’ is rock ballad genre that is composed with a string melody on top of the smooth piano which doubles the sorrow atmosphere and electric guitar that boost up the energy on the song. The lyrics conveys a message of a man’s regret that made him realize how precious the love was to him after the break up. EUNHYUK participarted in the lyrics to enhance the quality on the production.

Furthermore, listeners can enjoy SUPER JUNIOR-D&E’s musical world with a variety of five tracks, including ‘Contact,’ which has a refreshing charm, ‘Change,’ which features a unique composition with a heavy a rhythmical Lo-Fi hip-hop genre, and ‘Offline,’ which is an addictive song with a groovy rhythm and catchy melody.