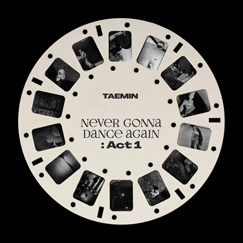 This album contains a total of nine songs in various genres including the single, ‘Criminal.’ The album will give chance to experience TAEMIN’s unique music.

TAEMIN’s third regular album, ‘Never Gonna Dance Again’, is composed of two albums, ‘Act 1’ and ‘Act 2’, which are released in sequence following the pre-released prologue single. It illustrated TAEMIN’s concerns and challenges in the search of the new self as an artist into a cinematic epic, like the passage from the novel, Demian, “The bird fights its way out of the egg. The egg is the world. Who would be born must first destroy the world.”

In particular, ‘Act 1’ metaphorically shows the beginning of the resistance to destroy the familiar world. The single, ‘Criminal’, presents the conceptual music and powerful performance containing TAEMIN’s charisma for resistance, and it is expected to win great response.

Also, highly-experienced domestic and foreign musicians including the world-renowned producing team ‘The Underdogs,’ the top-notch producing team of England ‘LDN Noise,’ and the newly emerging retro producer ‘Park Mun-chi’ participated in the production of this album, while one of a kind rapper ‘Kid Milli’ is also featured for the album’s perfection.

Falling under the Spell of TAEMIN! Single, ‘Criminal’

The single, ‘Criminal’, is a synth-wave track that combines suspenseful rhythm and newtro sound. The lyrics conceptually illustrates a woman’s fatal and undeniable attraction as ‘Stockholm Syndrome’, which creates a deep cinematic mood along with TAEMIN’s sensual vocals.

‘Black Rose’ is a pop song with the lyrics metaphorically comparing the moment of finding one’s new-self as an ‘eclipse’, where the moon and sun are aligned in occultation. It also features rapper Kid Milli to maximize the dark vibe of the song. ‘Strangers’ is a dark pop song in mysterious atmosphere. As a special effect, heel clacking sounds were added in order to dramatically depict the moment where you accidently run into your ex-lover and simply just pass by pretending like nothing happened.

‘Waiting For’ is a medium-tempo dance track that features the violin melody and the adlibs of Spanish guitar. The tango rhythm that leads the whole song adds more sensual atmosphere, and the lyrics depicts a guy who fell for the girl in his dream and tries to interpret the dream.
‘Clockwork’ is a pop ballad song with poetic lyrics that compares the behavior of constantly recalling the memory of the bygone love to the continuously moving clock. ‘Just Me And You’ is an R&B pop song that contains the wish to wipe out everything in the troubled world and fill it instead with every bits of the true lover.

‘Nemo’ is a retro R&B song that interestingly expresses the belated regret after the breakup by using the homonym, ‘Nemo.’ ‘Famous’ is the Korean version of the single of TAEMIN’s third Japanese mini album. ‘2 KIDS’ is a prologue pre-released single. All nine songs will present various charms of TAEMIN.