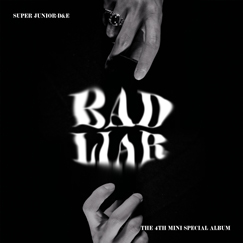 SUPER JUNIOR-D&E is releasing a special version of their 4th mini album.

Previously on September 3rd, SUPER JUNIOR-D&E released their 4th mini album, ‘BAD BLOOD.’ The special album, ‘BAD LIAR’, is an extension of the previous album, newly packed for the release on September 28th.

This brand new special package will be released at 6 p.m. on September 28th through various online platforms, including Flo, Melon, Genie, iTunes, Apple Music, Spotify, QQ Music, Kogou Music, and Kuwo Music. The music video for the lead single, ‘No Love,’ will also be released through YouTube and Naver TV SMTOWN channels simultaneously.

This special album includes a total of seven tracks with two new tracks to the existing five: ‘B.A.D,’ ‘Contact,’ ‘To you, Tomorrow),’ ‘Change,’ and ‘Off Line.’

The lead single, ‘No Love,’ is an electronic dance song that builds up tension by incorporating pluck synth and swing snares into various bass sounds. The lyrics bluntly express the strong attraction felt to a charming girl: “She wants it. Real Love. Tell me what love is. You whisper to me. Kiss me. All Right “, “I feel your breath when it reaches me. Peace & Harmony. Every scene gives the dramatic thrill like I am riding the wave.”

The next track, ‘What Is Your Name? (Feat. SHINDONG) (Bonus Track)’ was performed but not released by SUPERJUNIOR-D&E and SHINDONG during the ‘Super Show 8’ held in October 2019. The witty lyrics and charming performance of this song brought many requests for a release. Many fans are waiting for this song in excitement.