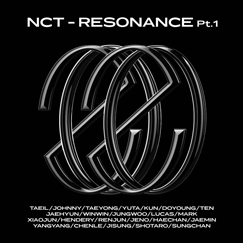 A total of 23 NCT members participated in the making of ‘NCT – The 2nd Album RESONANCE Pt.1.’ Listeners can enjoy the vast genres of music involved and the charms of each different combination of members forming the united team, NCT U, NCT 127, NCT DREAM, and WayV.

This album portrays NCT’s moving forward from ‘EMPATHY’ in 2018 to ‘RESONANCE’, communicating through music in order to create an immense synergy and influcence. NCT presents their exclusive style of music through creative story-telling. This story-telling is based on NCT’s World View which implies a message of connecting with each other through their ‘Dreams’ and finding unity with ‘Music’.

The single, ‘Make A Wish (Birthday Song),’ is a hip-hop based pop dance song with a catchy hook, the whistle riff. TAEYONG, DOYOUNG, JAEHYUN, LUCAS, XIAOJUN, JAEMIN, and SHOTARO sang this track. The lyrics encourage listeners to make a wish about making their dreams come true based on the belief that they are always connected. The English version is also available exclusively on online music platforms as a bonus track for the global fans worldwide.

‘From Home’ by TAEIL, YUTA, KUN, DOYOUNG, RENJUN, HAECHAN, and CHENLE is a slow-tempo R&B pop-ballad song. The lyrics, written in Korean, Chinese, and Japanese, express the feelings of NCT members looking back on how they worked hard together to realize the same dream: to become a ‘singer.’ The Korean version is also included to offer a different yet equally pleasant vibe of this song.

‘Misfit’ by JOHNNY, TAEYONG, MARK, HENDERY, JENO, YANGYANG, and SUNGCHAN is a pop style song reminiscing 1990’s hip-hop era. The lyrics depict modern society’s confident personality where people pioneer their own paths without limiting themselves. ‘Volcano’ by TAEYONG, DOYOUNG, JAEHYUN, WINWIN, JUNGWOO, LUCAS, and MARK, who had teamed up for ‘BOSS’ in ‘NCT 2018,’ is a hip-hop dance song with intense drums and heavy bass featuring lyrics that show their great passion and enthusiasm.

The album also includes three other songs that evolved from the same theme, ‘Dance,’ in various styles by different units of NCT: NCT 127, NCT DREAM, and WayV. ‘Music, Dance’ by NCT 127 is an energetic Afrobeat dance song. ‘Déjà Vu’ by NCT DREAM conveys the passion of the seven members. ‘Nectar’ in Chinese by WayV, features a cool and intense mood, with a pleasuarable melody and sound to attract listeners.

This album also includes an instrumental song, ‘Interlude: Past to Present,’ which expresses the time flowing from past to present. All thirteen tracks will give a chance to explore the rich sound of NCT’s music.