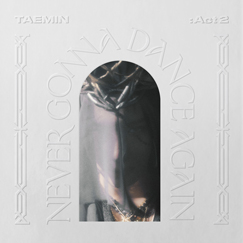 This album finalizes the grand epic story of TAEMIN’s third regular album, ‘Never Gonna Dance Again.’ It contains nine songs with diverse genres, including the single, ‘IDEA.’ The album will give a chance to experience TAEMIN’s unique music.

The third regular album, ‘Never Gonna Dance Again,’ which is comprised of the prologue single, ‘Act 1,’ and ‘Act 2,’ illustrates TAEMIN’s concerns and challenges as an artist with cinematic story and music. ‘Act 2’ metaphorically expressed TAMIN’s search for a new identity, raising fans’ expectations.

Global musicians, including the hit-maker YOO YOUNG JIN, British producing team ARCADES, and renowned songwriters such as Bram Inscore and minGtion teamed up for this album. TAEMIN also partly wrote the lyrics for three songs and demonstrated his musical talent. This album features Asia’s star BoA, for the highlight part of the single ‘IDEA,’ and Red Velvet’s WENDY, who is known for her unique vocal, for one of the songs in the album to double its charms.

The single, ‘IDEA,’ is a dance-pop track that features the vivid contrast between the light and stylish section and the groovy and intense section. TAEMIN’s vocals that change variously according to the mood of each section and BoA’s voice, featured in the killing part, attract listeners’ ears. At the same time, the lyrics, written on the theme of Plato’s Theory of Forms, depict the process of departing the former self in search of the new self.

This album also contains three songs that TAEMIN partly wrote the lyrics for. ‘Heaven’ is a medium tempo track that gives a splendid atmosphere and conveys the sincere words of consolation. ‘Think Of You’ is a refreshing and cool electronic pop track that expresses the words that comes to his mind when he thinks of his fans. ‘Pansy’ is a country-based pop song that expresses gratitude to those who have shown continuous support to TAEMIN.

‘Impressionable’ is a minimal track that compares the process of seducing the opponent to a spider hunting its target with a spider web. ‘Be Your Enemy’ is a medium tempo track that gives a warm healing message that he will comfort the pain and sadness that are difficult to say easily. Red Velvet’s WENDY is featured in this song to maximize the emotional mood of the song.

All nine songs will amaze the listeners such as ‘I Think It’s Love,’ which is a ballad song that confesses love with clumsy but candid words, ‘Identity’ which is an R&D pop track that depicts the complicated feeling after facing a new identity, and the Korean version of ‘Exclusive’ that TAEMIN released in Japan.