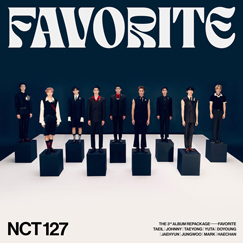 This album contains 14 songs, with three new songs, including the title track, ‘Favorite,’ ‘Love On The Floor,’ and ‘Pilot,' and eleven songs from their 3rd full album, amplifying curiosities about new music and performance of NCT 127.

Also, NCT 127 made a splendid accomplishment, becoming a double million-seller, only in a week after releasing the third full album, ‘Sticker,’ and has continued their brilliant march of triumphs by topping various charts, including domestic album and digital track charts and winning nine trophies on TV music shows.

The single, ‘Favorite,’ is an R&B pop dance song with an addictive signature whistle sound and rich vocal harmonies. It expresses the dramatic message that even at the end of catastrophic love, ‘you’ would be my everything and happiness.

‘Love On The Floor' is an energetic R&B dance song which two members of NCT 127, TAEYONG and MARK, participated in the rap making. The song romantically illustrates bubbly love between  couples through dancing. ‘Pilot’ is a medium R&B pop song that combines sensual beats and NCT 127's vocals, telling a story that they will become their loved one's own pilot to bring happiness as if they are always having a trip.