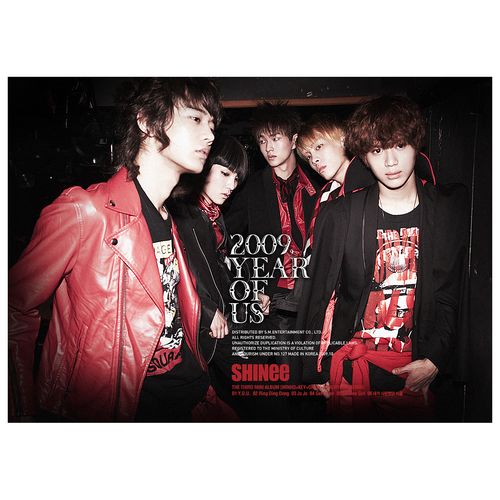 SHINee, Comes Back with Powerful Charisma!
The Release of Third Mini Album on 22th!
The title song, ‘Ring Ding Dong’ preannounced
a sensational hit to the Music Scene!

The contemporary band, SHINee, is making a triumphant come-back with the release of the third album ‘2009, Year Of Us’ on the 22th.
This 3rd mini album is a brand new recording, having 5 months break since the release of 2nd mini album ‘Romeo’ on 25th of May.
It is expected to immediately receive explosive responses because SHINee has made continuous hits from the debut song ‘Replay’ to ‘Love Like Oxygen’, ‘Amigo’, and ‘Juliette.’

Hit song makers, such as Young-Jin Yoo, Kenzie, and Young-Hu Kim have participated in this album, and it contains 6 charming songs showing the talent of each member of SHINee including the title song ‘Ring Ding Dong.’

As the next generation fashioni-stars, SHINee has also changed their styles radically into glam & chic look with the addition of neo-gothic style and created carefree and dreamy style using monotone and chic clothes matching with splendid objects; All of these elements shown in the teaser-photos continuously elicit hot issues and topics.

‘Ring Ding Dong’! Presents a new realm of SHINee by introducing the Powerful and Addictive Sound!

The title song, ‘Ring Ding Dong’, is an Afro-Electro song completed through the groove lines of African Congo drums carrying the sound of electro synthesizer in modern flavor, and it is the work of hit maker, Young-Jin Yoo.
Lyrics contain the situation of unconsciously falling in Love as saying “What’s happening to me” as if appealing for his sympathy. ‘Ring Ding Dong’ is very cartoon-like fruitful expression for bell ringing in someone’s head at the very moment of falling in love.

With the unique title, ‘Ring Ding Dong’, and the powerful and addictive sound capture the hearts of the listeners at once, SHINee is undeniably eligible to present strong and charismatic images instead of existing colorful and pleasant image.

The album also presents a variety of different charms of SHINee through great songs such as ‘Y.O.U. (Year Of Us)’ which is a message of gratitude to the fans who always show their great supports , the trendy Euro pop dance song, ‘JoJo’ composed by another hit maker, Kenzie, and the swing beat based rhythmic song, ‘SHINee Girl’.

Featuring by Luna, the Member of Best Rookie Group f(x), and Yeon-Woo Kim, a vocal of Sweet Voice!
There are several songs appealing for the uniqueness of each member in order to achieve better quality of the album. Luna, the member f(x) did featuring on the intensive rap battle between Minho and Key, which is called ‘Get Down’.
O new’s first solo song, ‘The Name’ sings about the pain of unattainable love through the sweet voices of O New and the featuring artist, Yeon-Woo Kim, who has added perfection of thise album.

SHINee’s third mini album, ’2009, Year Of Us’ will be released on the 19th, and it is expected to become a megahit in order to embroider the music world with the name of SHINee during the second half of 2009 as the title infers The title song ‘Ring Ding Dong’ is also expected to bring enthusiastic response.