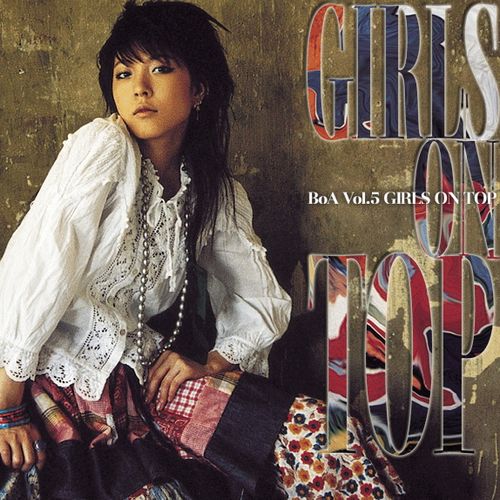 Top Star of Asia, BoA
June 2005, She Returned as a Woman.
New and Bold Challenge of 20-Year-Old BoA!
The 5th Regular Album <Girls On Top>!

Asia’s top star BoA (S.M. Entertainment)’s 5th regular album <Girls On Top> will be finally released on June 23. This album will give you the chance to experience the musical growth and development of BoA who now is a woman. It contains total 13 gems of songs in various styles such as Urban soul, R&B dance, Pop ballad, and acid pop through which you can find great charms of BoA.

Urban Soul Style Title Song <Girls On Top>
The masterpiece created by the top composer, Yoo Young-Jin!
A Cry of a Woman, BoA, to the Androcentric Society!

The title song of the 5th album ‘Girls On Top’ is a creation of a R&B singer and an excellent composer, Yoo Young-Jin, and this urban soul style song is the one you can listen to the much stronger vocal of BoA that she sang as if she is shouting out the words in the lyric. Recently, the urban soul style songs that minimized the instrumental section to build up chords with the melody itself or the one chord type songs are becoming big hits, and “Girls On Top” incorporated rave and big beat to the one chord progression to make it stronger and more Korean.

Like the title, Girls On Top, the song contains a strong message which opposes and refuses the male chauvinistic expressions, the male chauvinistic stereotypes, and stereotyped anachronistic ideas against women in the present age. The message advocates that the sexual discrimination inveterately overflowing in our society must not be tolerated any longer and that even the slightest inequalities against women must be eliminated from the mind of every human being.

This is the song where BoA delivers a strong message against the inequalities and stereotypes against women on behalf of the women of this age as a dignified woman in her clear and bright voice.

Experience Many Different Charms of Maturer and Stronger Songs of BoA Covering Various Genres From R&B to Dance, Pop Ballad, and Acid Pop!

『Gifts from the Composer of Hit Song ‘My Name’, Kenzi - ‘MOTO’& ‘Garden In The Air’ 』

Other than the title song, ‘Girls On Top’, the 5th album of BoA is packed with songs composed in a variety of different genres that you can feel BoA’s maturer music style

and her new charms. The first track, MOTO is a R&B dance song with a touch of hip hop rhythm where the intense and elaborate arrangement giving the sense of thrilling speed outstands so that it makes you picture BoA running at full speed toward higher place while she is already on the top. The three dimensional vocal arrangement and brilliant synthesizer instruments come in by spurts to create dizzying but unique ambience while balancing the beautiful singing of BoA to speed on the imaginary road in the lyric, ‘motorway 065.’

Garden In The Air is an acid pop song which is a relatively rare genre in Korea. The elegant groove and melody that are heard in a unique and beautiful way will make you feel the catharsis as if you are absorbed into the unknown world.

Also, the medium tempo urban R&B, “Do you love me?” uses the laidback rhythm to make sticky beats while the orchestration of the synthesizer section builds up overall groove to complete the lyric containing the restless heart toward the lover more sensuously.

“Can't Let Go” is the first classic R&B ballad of BoA expressed with rich soulful voice and full emotion. Especially, KANGTA participated as the backing chorus and the harmony of the best artists, BoA and KANGTA, will bring another joy to the fans.

Also, the album contains only the great songs such as the song with an interesting

『Fantastic Harmony of the Beautiful Image of BoA in Korean Dress and the Calm Grace of Ojukheon (Black Bamboo House)! ‘Letter in Fall’』

And the last song, Letter in Fall, is a remake that became famous for the M/V shot in Ojukheon, the Black Bamboo House. The recording and M/V shooting took place in Ojukheon, where Shin Saimdang, the symbol of a wise mother and good wife,

once lived to depict the most Korean image of BoA who has been singing songs made in western genres to mark the time when BoA became a woman from a girl as she turned 20 this year.

The popular song of all ages, ‘Letter in Fall’, was recorded unaccompanied along with the sound from the site, Ojukheon, to give it a new feeling that will make a fine work with the M/V depicting the image of a Korean woman longing for her love.