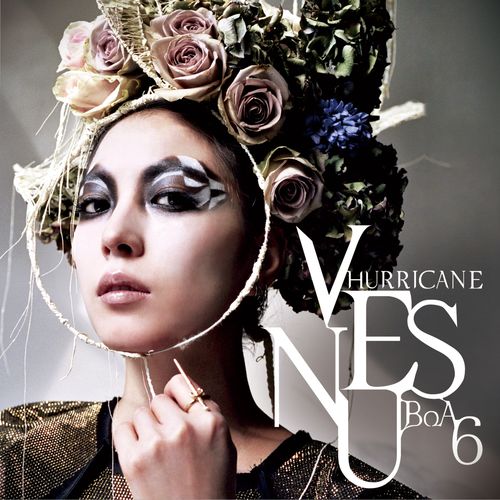 Return of BoA!
In August, a Powerful Hurricane is going to Sweep the Music World!
BoA, Releasing the 6th Regular Album ‘Hurricane Venus’ on August 5th!

BoA is making a grand comeback with the 6th regular album ‘Hurricane Venus’ on August 5.

This album is the new album released in 5 years since the 5th album <Girls On Top> released in June 2005, and as much as it is released on the 10th anniversary of her debut, it covers all the experiences, knowhow, and skills she built up through extensive overseas activities that fans will experience more powerful musical styles of BoA.

Famous composers inside and outside Korea including Dong-Ryul Kim, Jinu (hitchhiker), Kenzie, Jong-Wan Kim of Nell, and JuJu Song worked with BoA in a fantastic teamwork to create a perfect album including BoA’s own songs, and the album includes total 11 songs that can show various aspects of BoA as an artist such as the distinctive performance and singing ability that it will certainly mesmerize many music fans.

The title song, ‘Hurricane Venus’, depicts a girl passionately in love like the hurricane through the lyric and makes powerful impression in the chorus. The sound of vocoder and thick lead synth accentuated in the song make up the elegant and powerful sound, and the hook that captures listeners’ ears, the sexy groove based on urban style, and the powerful beat are combined to maximize the fascinating voice and performance only eligible for BoA. Especially, BoA expressed her ambitions for her returning through the title of the song she named by herself and engagement in writing the lyrics which all will strongly attract many music fans.

Another attraction of this album is BoA’s own songs that show her sensibilities.

‘LET ME’ expresses her passion toward dance and the powerful beats arranged by Jinu (hitchhiker) are naturally titillating. Also, ‘Ordinary Day’, the song expressing feelings of everyday life, doubles the fun of hearing by mixing pop style melody and the unique lyrics.

Brings Colorful Music Experiences through ‘Stand By’, ‘Implode’, and ‘Don’t Know What To Say’

‘Stand By’ is the song presented to BoA by the senior singer Dong-Ryul Kim, and this is a charming ballad with the sad lyric and melody describing the poignant heart of a woman who can only look at the one she loves but cannot express her love. ‘Implode’ is the work of Jong-Wan Kim of Nell, and this song has an impressive structure where it starts with acoustic guitar and dry voice and is layered up with piano and contrabass and climaxing with organ and cello.

‘Don’t Know What To Say’ is the collaboration with Soon-Hwon Kwon, BoA’s elder brother and a classic pianist, and it brings interesting listening experience by combining the classical piano solo BoA’s powerful voice.

This album also includes ‘GAME’ that brings the cute and sexy temptation, ‘DANGEROUS’ that Thomas Troelsen, the composer of BoA’s American debut song, joined the making of, ‘M.E.P (My Electronic Piano)’, an electronic-pop with interesting lyric, ‘ADRENALINE’, an elegant dance song with triplet beat, and ‘Romance’ which is a pop-jazz ballad arranged by the famous jazz pianist Juju Song, and all 11 songs of various genres in this new album are expected to sweep the popular music world with hurricane power in the latter half of the year.

BoA will be actively appearing in various stages with the 6th album ‘Hurricane Venus.’