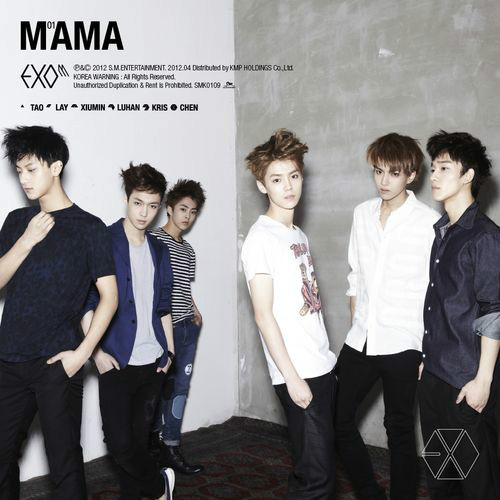 The Splendid Takeoff of New Global Stars, EXO-K and EXO-M!
The Long-Cherished First Album, ‘MAMA’, to Be Released on the 9th!
Drawing Attention by Making their TV Debut on the 8th both in Korea and China!

SM’s new group, EXO-K and EXO-M, are releasing the first mini album, ‘MAMA’, on the 9th.


EXO is the name that came from “Exoplanet” which means the star outside the solar system, and it implies that EXO is the new star that came from the unknown world expected to bring new syndrome to the global K-pop craze with its unique music and powerful performance as well as the trendy fashion.


EXO is comprised of two teams, EXO-K with “K” indicating “Korean” comprised of Suho, Kai, Chanyeol, Sehun, Baekhyun, and D.O. and will mainly appear on the stages in Korea and EXO-M with “M” indicating “Mandarin” comprised of Kris, Luhan, Tao, Lay, Xiumin, and Chen, in China, and they have been become a hot topic even before the debut for the innovative strategy of releasing the same songs at the same time on the same day in Korean and Chinese and also making a debut in Korea and China at the same time.


Particularly, EXO-K and EXO-M estblished a worldwide real time online promotion strategy by releasing various contents such as teaser videos, photos, music videos through YouTube and SNS etc. for 100 days. Even though they are rookie, these contents got over 30 million views from worldwide fans and announced the birth of the new global star.


In addition, EXO-K and EXO-M successfully held a large-scale show case in Korea on March 31 and in China on April 1, initiating full-scale activities in Korea and China and making fans expect even more about the mini album.


The first mini album of EXO-K and EXO-M to be released on the 9th, ‘MAMA’, will be available in two versions, one recorded in Korean with EXO-K and the other in Chinese with EXO-M, and the greatest composers of the world including Young-Jin Yoo, Teddy Riley, Thomas Troelsen, and Hyuk Shin participated in the making of this album to establish the unique musical colors of EXO-K and EXO-M.


The Title Song with the Powerful Orchestra Sound Overwhelming the Ears - ‘MAMA’!

The title song of this mini album, ‘MAMA’, is the work of the hit composer, Young-Jin Yoo, and the majestic sound of the Gregorian chant and the orchestra is amplifying the mysterious ambience of EXO-K and EXO-M and the sharp synth and guitar riff and powerful shouting at the dance break overwhelm the ears.
The lyric enhanced the perfection of the song further by reflecting the anxiety about the conflict and the absence of communication the contemporaries feel between the reality and the digital world and the hope for the recovery of the pure love.

Prologue Single Introducing EXO to the World, ‘What Is Love’
Perfect Combination of Powerful Beat and Dynamic Performance! ‘HISTORY’

‘What Is Love’ is an R&B made of elegant sounds and is a joint work of the world-renowned producer Teddy Riley and the hit composer Young-Jin Yoo, and it attracted the attention of many music fans after it was released in January as the first prologue single announcing the coming of EXO before the release of the official album of EXO-K and EXO-M, and the dreamy and rhythmical interpretation of the complex emotion one feels when falling in love is impressive.

‘HISTORY’ was released as the second prologue single of EXO-K and EXO-M, and it perfectly combines the melody on powerful and bobbling beat and the dynamic performance like the “trousers-dusting dance”, showing the unique attraction running counter to ‘What Is Love.’

Also, the mini album includes “Angel” with sensuous melody line and the impressive piano sound, “Two Moons”, a trendy crunk song that made itself more special by featuring SHINee member, Key, and ‘MACHINE’ where the powerful and energetic vocal skills of the members stand out, and all 6 songs of the album will present a variety of attractions of EXO-K and EXO-M, expected to bring great responses from the music fans of the world.


EXO-K will present their first official performance through SBS Popular Song which will be aired on the 8th and EXO-M, through Chinese Music Charts held on the 8th that the expectations and curiosities of the fans about EXO-K and EXO-M who will be appearing in various stages in Korea and China will be amplified.