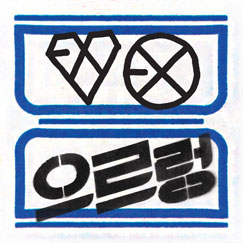 
EXO released the repackaged album of ‘XOXO(Kiss&Hug)’ with three new tracks on August 5 and is expected to hit the music industry once again.

EXO released their first full-length album ‘XOXO(Kiss&Hug)’ on June 3 and enjoyed great popularity by putting on a dynamic stage with brilliant performances with their title song ‘Wolf’ that resembled a great musical. Their first full-length album took first place in the monthly chart of the Gaon Chart in June, while also taking first place in the US Billboard World Album Chart, and sweeping various album charts in Asia such as Taiwan, Hong Kong and Thailand.

In addition, EXO also swept music shows on nation-wide television with ‘Wolf’ and gained explosive popularity. It is expected that the ‘XOXO(Kiss&Hug)’ repackaged album will also receive rave reviews.

This repackaged album will contain the eleven tracks of the first album, as well as three new tracks such as ‘Growl’, ‘LUCKY’, and ‘XOXO’ for a total of fourteen tracks. It will be more than enough to experience the diverse musical colors of EXO.

‘Growl’ is a dance song based on refined urban/R&B sounds. It has impressively witty lyrics that a man growls against other men to keep his loving girl.

‘LUCKY’ is a song that combines fresh sounds and rhythmical melody lines. This is a love song that expresses the feeling of a boy on a nice day, and it shows the innocent and childlike charms of EXO by containing messages from EXO to their fans.

Lastly, ‘XOXO’ is a sweet urban R&B song with the message of ‘beautiful love stories always have happy endings with hugs and kisses’. It displays the vocal harmony of EXO by talking about a beautiful confession of a boy who tries to write a letter to his secret admirer using analog emotions.