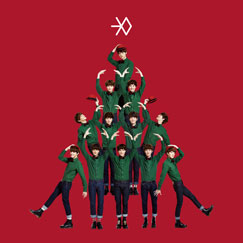 EXO to Release Winter Special Album “Miracles in December” on December 9th!
EXO Is Sending You a Warm Winter Melody!

EXO, the hottest issue in 2013, will release the winter special album “Miracles in December” on December 9th.

This album will be showcased in two versions in Korean and Chinese, consisting of the title song “Miracles in December” and the other five new songs with lyrics cotaining the winter atmosphere as well as revealing each different attraction from its 12 members, and it is thus expected to highly appeal to the music fans.

Particularly, this winter album is specially designed as a gift to retrun the enthusiastic love from their fans. Only in their 2nd-yeare of their debut, EXO set a notable milestone with their 1st regular album “XOXO” which consecutively made the big hits with “wolf” and “growl” in the album. This 12-member boy group proved they are the “hottest iussue in 2013” by winning grand prize in the year-end music awards, and their album sales is just before the million to be crowned as a millionseller.
The title song “Miracles in December” is a pop ballad song highlighted by emotional piano melodies and beautiful string sounds.  It is expected to draw keen attention by showcasing another emotion of the 12-member boy group who had already caught your eyes with the unconventional and dynamic performances until now.

For instance, the lyrics deeply touch the audience with the story that due to an irresistible yearning for lover after their breakup, one earns almightiness to hear and see his beloved one and he can fill the world with her even though she is not with him anymore, but he finally realizes he could not make her actually come back even with those almightinesses.

In the meantime, the song ‘Christmas Day’ gives a warm atmosphere harmonized with the beautiful and emotional melodies as well as the lyrics comparing the feeling of the excitement waiting for the lover to the felling of the excitement waiting for the Christmas present,, while the groovy hiphop song “The Star” falls on your ears with the witty words comparing the lady whom one loves far beyond the reach to the most shining star on top of the Christmas tree.

Besides, this album consists of a total of 6 tracks including: an acoustic R&B song “My Turn to Cry” highlighted by the 12 boys’ emotional vocals and harmony; an acoustic pop song “First Snow” reminding him the first love who has gone a year ago; and the orchestra version of the title song “Miracles in December”. It is expected to be enough for fans to meet the EXO’s winter music with different atmosphere.