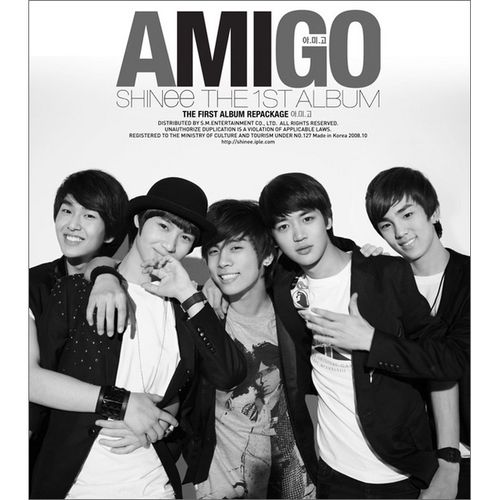 The Best New Artist of 2008, SHINee, Releases the Repackaged Album of the 1st Album, ‘Amigo’ on the 29th!
The Title Song Released on the 24th through Online!


The best new artist of 2008, SHINee’s repackage album of the first regular album, ‘Amigo’, will be released on the 29th.
This repackage album presents total 15 songs including the songs from the 1st album as well as 3 new songs such as ‘Amigo (Areumdaun Minyeorueljoahamyeon Gosaenghanda (Heart aches when you fall in love with a beauty.))’, ‘Forever or Never', and ‘Love should go on (Plugged by DJ_Oneshot)’, that fans can enjoy more variety of the contemporary band, SHINee.

‘Amigo’ is another new title song presented by SHINee following ‘Replay’ and ‘Love like Oxygen’, and it is a word created from a Korean phrase, ‘Areumdaun Minyeorueljoahamyeon Gosaenghanda (Heart aches when you fall in love with a beauty.)’ by taking first syllables of each word and it also means a ‘friend’ in Spanish. The sensuous lyric written by the hit composer, Youngjin Yoo, and the elegant ambience of the song created by a team of composers of America’s famous publishing company, Xperimental Music, made the perfect harmony in the song.

The groovy arrangement and the powerful refrain will captivate the ears of many listeners, and it is expected to bring great responses from music fans as it will be released in advance through online music sites such as Melon, Dosirak, and Cyworld from 10a.m. on the 24th.

Also, ‘Forever or Never' brings new charms of SHINee that have not been presented through their previous images with simple but powerful rhythm and the heavy voices that sound quite impressive, and ‘Love should go on (Plugged by DJ_Oneshot)’ that SHINee recommended for the remix personally to return the fans’ support creates a new ambience and trendier sound by invigorating the rap of Min Ho and Key.

SHINee will appear in various media starting with SBS Popular Song on the 26th which will be the first open performance of the title song of the repackage album of the 1st album, ‘Amigo (Areumdaun Minyeorueljoahamyeon Gosaenghanda (Heart aches when you fall in love with a beauty.))